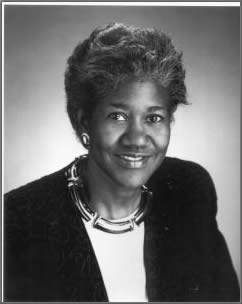 Eleanor Towns grew up in Rockford Illinois, and attended integrated schools throughout the late 1950’s.  In an interview with Forest Archeologist Margaret Hangan, Eleanor stated that she had a “lifelong interest in biology and forestry, but was discouraged from pursuing a career in the sciences.” In the interview, she describes vividly remembering a highschool guidance counselor advising her to focus on a career in “trade jobs” or nursing.

You can read the full interview here:  “What is he going to do about Ellie?” A conversation with Ellie Towns, Retired Southwest Regional Forester

Towns became the director of lands, soils, water and minerals for the Rocky Mountain Region, and then became the director of lands for the Forest Service in the Washington office. Eleanor Towns was eventually promoted to Regional Forester for the southwestern region of the United States. During this time, she managed a workforce of 2,000 employees and 22 million acres in Arizona and New Mexico. She was highly regarded for her working relationships with members of Congress, and her collaborative efforts with cattlemen, environmental groups, industry representatives, and state, local, and pueblo governments.

She is the recipient of numerous awards from special acts and services, including the “Meritorious Presidential Rank” awarded by President Bill Clinton. Eleanor Towns was awarded for her “sustained superior accomplishment in the management of programs for the federal government.”  This award recognized her for her “handling of the escaped prescribed Los Alamos fire, her work on restoration issues, addressing grazing clashes between ranchers and environmentalists, her work in diversifying the workforce.”

Her social justice work and inspiring career paved the way for people of color and women in forestry.    She now tours as a motivational speaker, speaking on the need for diversity in STEM fields.